When I first learned that Your Heart Is A Muscle the Size of a Fist was the selected book for Whatcom READS 2018  (five author events, March 8-10), I’d never heard of Sunil Yapa. Learning about talented, engaging authors is one of the beauties of a county-wide book club.

By now, Sunil,  is back in the “little farmhouse” in Pennsylvania that he shares with his dad, “where I will let my beard grow long and try to write another book.”

Yapa, raised in Pennsylvania by a Sri Lankan father and a mother from Montana, had not planned to be a writer. He’d majored in economic geography, taking classes at Penn State from his father, Lakshman Yappa.

“I assumed I’d follow in my father’s footsteps, kinda like taking over the family hardware store, but a month out of college I knew I wanted to write.”

After graduation in 2002, he and a friend took a week to come up with ideas for self-employment. No “regular jobs” for them. His friend wanted to buy luxury cars in Texas and sell them in New York. Sunil thought it would be fun to hawk posters out of the back of a truck. He prevailed.

So off they went, traveling for two-three months each year for ten years, all across the country,  working twelve to sixteen hours a day, “selling posters of Britney Spears to 18-year-old girls.” Sunil earned around $10,000 per year––”enough money to live abroad, but not enough to live in the U.S.”

He went to Chile and began writing Fist, a novel about the World Trade Organization’s meeting in Seattle in 1999 which occurred when he was in college. “I wasn’t brave enough to go then,” but he was impacted by a picture of a woman bleeding from a baton beating. He wondered what prompted her to be in Seattle, fighting for policies affecting people she didn’t know.

He wrote the book in seventeen countries over six years. The first draft was 600+ pages. And his computer, containing the completed manuscript, was stolen from his hotel room in  Chicago.

His response: for three months he propped himself up on his father’s couch, perfecting the art of Netflix-binging and watching almost every basketball game that aired. But the book pursued him, so he re-wrote it. He reduced the total number of characters from sixty-five (!) to seven and did not allow himself to  use prior notes.”That would have been like taking dictation from an earlier, dumber self.”  At the conclusion of his rewrite, Sunil  concluded:

One might wonder why a clever young grad student didn’t back up his manuscript.

In Chile, where he started and finished the Fist, there was no internet, so he stowed his laptop in the oven (yes, the oven!), and never had a problem with theft. When he returned to the United States, he didn’t want to overburden his father’s printer by generating  600 pages and then, as he traveled to Chicago, he thought a hotel room was a safe place to leave his computer.

The rewrite, which took six years, paid off. Sunil’s agent sent the book out on a Friday to twenty-five editors. On Saturday morning, his agent called. “Can you be in New York on Monday?” Lee Boudreaux, who had stayed up all night reading Fist, wanted Sunil’s book to launch her imprint for Little, Brown, and Company. She liked the dynamic plot, and the language—”urgent, dynamic, inventive, surprising, unforgettable.”

I also was enchanted by the book’s language (although I would have preferred less profanity). Consider this bleak but lyric passage in which 19-year old Victor is beaten.

He felt the batons battering him like hail, a shot to the kidneys that exploded like a star…He was glad to have done what he had done. To have wandered the world. To have loved his mother when she was alive. Even to have joined the people here today…he had raised his voice to a good and true human pitch..but now he knew all along…This had been the plan. To stomp the breath from his belly until he breathed no more. They wanted to erase him and all that he was from the face of the earth. And he was going to let them.

Violence is hard to write and hard to read. Fist is a novel, yes, but Sunil says “two-thirds of it happened. It’s important, to tell the truth.” Though he did not attend the WTO, he did the same kind of in-depth research as another Whatcom READS writer, Daniel James  Brown (The Boys in the Boat).

As a librarian, I love that Sunil referenced his childhood in this way: “I love libraries. They were my refuge, my church.”

Sunil examined twenty archived boxes of photos, signs, handwritten testimonies, and amateur video and audio recordings in the basement of the library at the University of Washington. In one of the boxes, he found the title of his book on a woodcut by activist-artist Dalia Sapon-Shervin.

“There it was, Your Heart is A Muscle the Size of a Fist. Just right. And I was lucky. The editors let me keep it.” 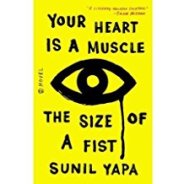 The cover of the hardbound edition, issued in 2016 is bright yellow with bold, informal font.  “I think the publishers chose yellow,” he said, “because nobody can remember the title or my name, but they do remember a yellow cover with a bold design.”

You might wonder why I chose to abbreviate the ten-word title of his book with Fist, one of the three nouns in the title. Fist identifies the protest, the principle storyline for the book, but the most important word in the title is Heart because this book is about empathy, courage, and love.

You might also wonder why  I’ve called Sunil by his first name instead of the more usual, journalistically correct, last name. Because, after asking him questions at two events and having him sign my books, when I stepped to the microphone at the Mt. Baker Theater, he addressed me by my first name.