P is for Perjoratives, Not Always Egregious 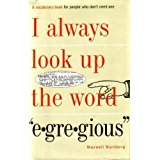 Every once in awhile our high school English teacher, Mr. Agol, would insert an unusual word into his lectures without including a definition, unless we asked for one. Whether I asked or not, I don’t recall, but I remember that he used the word perjorative whose meaning,  according to the OED, is “A word or expression which by its form or context expresses or implies contempt for the thing named; a derogatory word or form.”

As usual, the OED included an illustrative quote, this one from 1882: “Poetaster is a pejorative of poet.”  That sent me to the OED’s definition of poetaster: “inferior poet; a writer of poor or trashy verse; a mere versifier.”

The local poets I know are neither creators of trashy verse nor mere versifiers. Consider this poem by Victoria Doerper, published in the current issue of Cirque.

On my husband’s right thigh,

A ragged continent in mottled ebony

With a wide swath etched in red

And scratched across Brazil.

He’s pushed off for a journey

His own volcano, a fiery lava-

On the ball of his right foot.

And now his chronometer

Is on the blink, and the sky

Is cloudy most of the time,

His body is our new map

Hoping to come upon currents

That keep us on course,

That keep us from falling

Off the edge of the world.

Doerper is a poet whether writing prose or poetry. You can see more of this non-poetaster’s work here:

From my teetering stack of word books, I extracted one that I bought at a library book sale, I Always Look Up the Word “egregious” which has a chapter called “Taking a Turn for the Worse—Perjoratives.” The author devotes this chapter to words which have “gone bad.” For example, parochial and provincial, the author writes, “used in a geographic or religious sense…are still neutral descriptive terms. But used in sophisticated society, they mean “narrow,” “limited in outlook,” “not fashionable.”

The author notes that stink, odor, and reek once had favorable meanings. Diatribe in Greek culture used to mean “a short, ethical discourse,” but now implies a “long abusive or bitter speech.” Gratuitous formerly meant “given freely,” but now indicates something “unnecessarily intrusive, meddlesome, or uncalled for.”

Who was this clever author who has tracked down etymological changes of the pejorative kind? I endeavored to find something out about Maxwell Nurnberg. I approach “found” authors with enthusiasm, always looking forward to reading more of their work. I was started—and sad—that my first hit on the ‘net was an obituary in The New York Times, dated December 14, 1984.

But I did find some cool facts out about Maxwell Nurnberg: He sat cross-legged on his desk while teaching students at Abraham Lincoln High School. He was head of the English Department from 1930 until his retirement in 1966. He hosted a radio show called “What’s the Good Word” in the forties. Post-retirement, he wrote about words, publishing in magazines and books–a dozen books to his credit.

Born in Poland, he immigrated to the U.S. with his family when he was three years old. They settled in the Bronx where he grew up. He graduated from City College in 1919 and began teaching immediately after that.

I bet that there are many students who would call him their favorite English teacher, as I would call Mr. Agol mine. I’m sorry to have discovered Mr. Nurnberg’s work so late, but…happy to have his book in my hand, a meaningful edition to our collection.