M is for Meredith Maran…and me

“…Bend your neck so your head tilts sideways and walk slowly along the stacks of books, reading all the titles out loud, with expression, as if the titles were lines from a poem. Do this until the poem is finished.” –Ruth Ozeki’s prompt #13 in the Preface to Choices (Borderline Press, 2016)

I headed for the Crafts/Home Décor/Arts signage at the Burlington, Washington Library . The section was near the table my wife and I had staked out over which Andrew Carnegie’s portrait presided. I strolled along, whispering the names of three dozen titles and then selected a handful for the following prose poem. The book titles are italicized; the few connecting words are not.

A HARD DAYS WRITE: What is needed: Game Face, Super Focus, Just Look,The Hammer of the Gods, A Life in Color, Energy Flash

What is not needed: Mini Weapons of Mass Destruction,The idiot’s Gide to Playing the Harmonica, Fundamentals of Philately,The Alternative Guide to Cheerleading, and especially Depression Glass

Having fulfilled the requirements of Ruth Ozeki’s prompt, I can move from me to Meredith Maran, the author of Why We Write: 2o Acclaimed Authors on How and Why They Do What They Do,  a book I recommend to every writer or individual interested in what makes writers write.

Moran asks the question, “Why do writers write? Anyone who’s ever sworn at a blinking cursor has asked herself that question at some point.” The answer for herself is “I write books to answer my own questions. So I made a wish list of authors to interview for this one…” Her goal was “to talk to those who have beaten the odds: writers who have succeeded at both the craft and the commerce of writing, who could offer the greatest insights into the creative urge.”

Moran managed to obtain interviews with a stellar list of authors including Isabel Allende, Susan Orlean, Sue Grafton, Mary Karr, and Armistead Maupin, to name a few. The reader learns about Armistead Maupins favorite teacher Mrs. Peacock, about Sara Gruen’s rejection for Water for Elephants (“Circus books don’t sell”), and David Baldacci’s conviction that he’d be in prison if writing were illegal (“I can’t not write. It’s a compulsion.”)

In addition to essays by the individual writers, Maran has sidebars that list basic information about each author–their birthdays, upbringing, education, honors, books authored, etc. 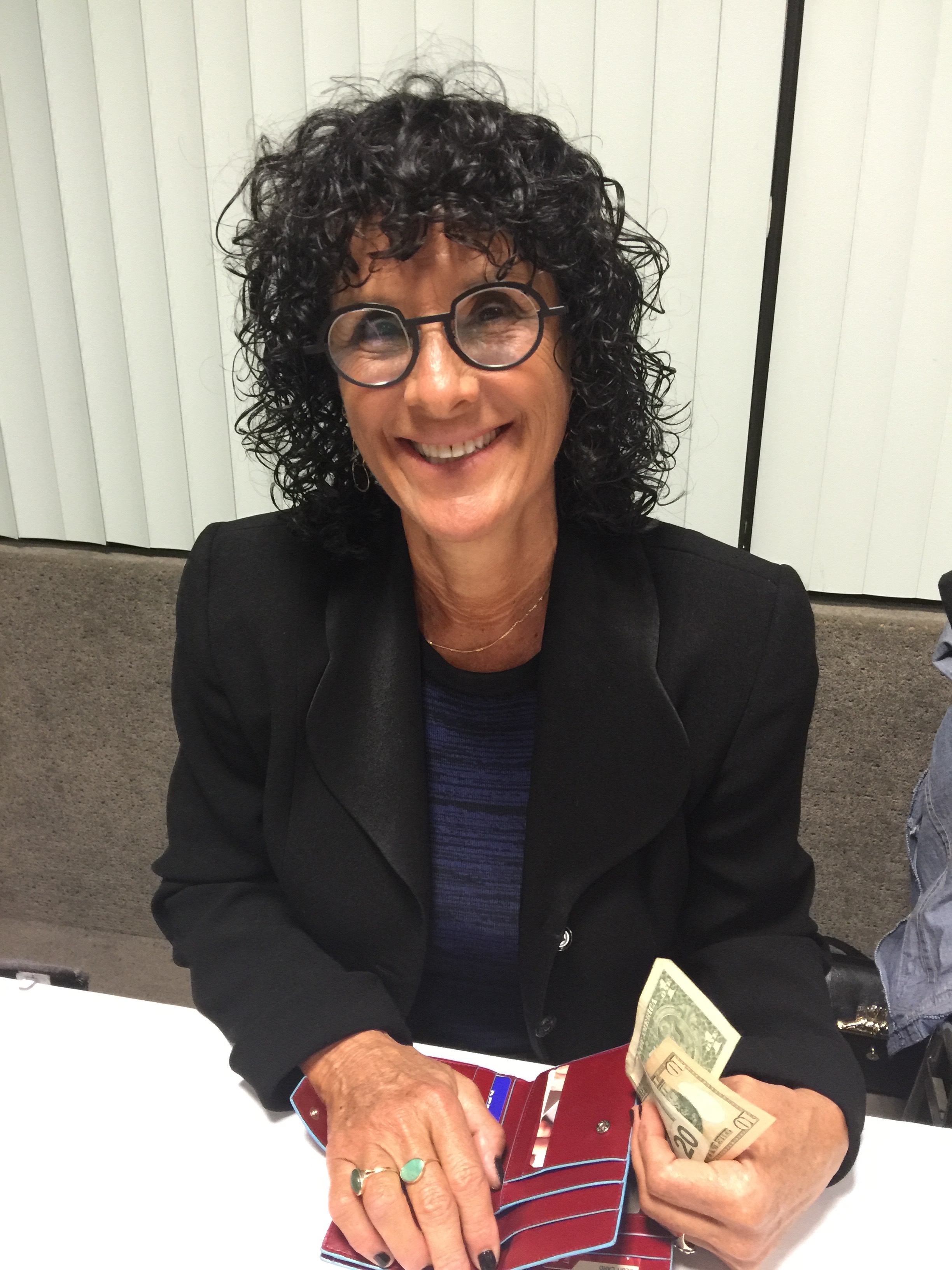 I met Maran briefly at the2016 AWP (Association of Writers and Writing Programs) Conference. She participated in the panel Not a Love Story: Owning the Romantic and Domestic in Literary Memoir. Note the word “literary” in the title. Maran and her compatriots want to avoid the relegation of their books to the Chick Lit pile, preferring to emphasize the significance of their content.

For memoir writers, check out her companion volume Why We Write about Ourselves: 20 Memoirists on Why They Expose Themselves (and others) in the name of Literature.

P.S. In the picture to the left, I’ve just bought her book which accounts for the flash of cash and her accommodating smile. I suspect that reading essays by The Twenty, as she calls them, will erase my inclination to write any more Tilted Head Poetry.