I is for In Flight

Find a feather. Throw it as far as you can. —Prompt #7, Ruth Ozeki in the Preface to Choices (Borderline Press, 2016)

Every blog seems to start with  questions: where will I find a feather? Do I hope that my pillow will release a tiny quill? Should I buy a plumed hat and extract its decoration? Could  I purchase a bola at a craft store? How can I connect the word  feather with the letter “I”?

My wife came up with the answer to the last question: “I is for In-flight.”

Then a feather found me. Walking Pismo Beach, I looked to my right toward a sand dune underneath the boardwalk and saw one feather, sticking straight up out of the sand. My wife said, “It’s crying “Pick me! Pick me!”

My sandals sunk into the sand as I ascended a slight incline. The feather, like the protective coloring of some animals, blended into the sand,  invisible except for its shadow.

I plucked it from its nest of stained, dappled (or perhaps just dirty) sand. About nine inches long, the shaft was black on one side, a splotchy white on the other. The paired branches off the spine were irregular in length, battered by whatever elements its life it had presented.

Because of experience with the lemon in C is for Citrus (Prompt #15), I decided to give this feather a name, Sentinel, and to learn about feathers before I cast it to the harsh winds that were currently buffeting kites. I kept Sentinel overnight.

Feathers are what make birds––all 10,400 species––unique, distinguishing them from all other animals. Zoologists say that feathers evolved from the scales of ancient reptiles. Many cultures consider birds sacred. The feathers of the Quetzal, Guatemala’s national bird,were worshipped by ancient Mayans and Aztecs. Quetzal feathers are still represented in art and woven into fabric. Native Americans’ regard for eagles as sacred is well known; less well know is their ritual of throwing down down before guests to signify peace and friendship.

I often experience very short snapshot dreams just before I wake up. In today’s dream,  I was standing in my daughter Leslie’s kitchen and I announced to her, “It’s raining rusty feathers.”

I am ill equipped to interpret that dream other than to say that I love rain, the color rust, and I have a new appreciation for feathers. I carefully carried Sentinel towards the cliff. It was time to throw her to the morning’s quieter breezes. 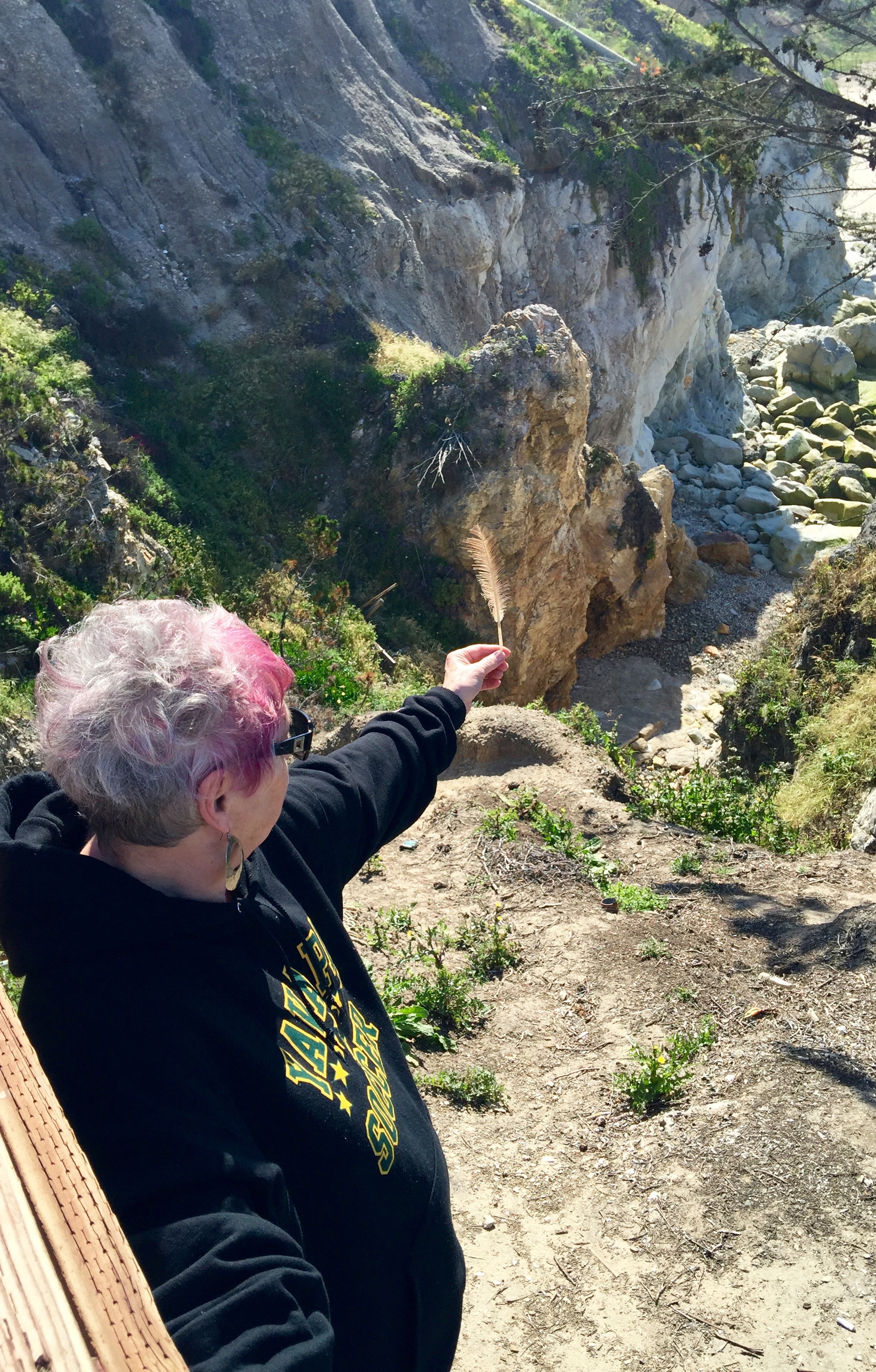 Holding Sentinel, I realized that she could be a feather from a dead bird. I prefer to think that the feather in my hand is one that was loosed in the yearly molting process that nature provides, and that Sentinel is standing watch on the cliff.

Because that’s where she landed, barely ten feet away. By the time I was ready to release her for flight, the wind was non-existent. I think she likes it right where she is.