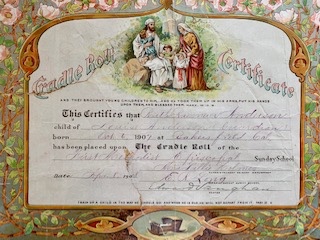 I discovered my mother’s 1908 decorative Cradle Roll certificate, a document that had foundered, unexamined, while boxed in my last two garages. Squelching embarrassment, I reveled in the new information it provided: that my grandmother was my mother’s “guardian;” that she and my mother were living in Bakersfield, California; that my grandmother––never a church-goer in my lifetime––had associated herself and her about-to-be adopted daughter with a Methodist-Episcopal Church.

Thrilled to obtain this information. I brought the treasured certificate and my latest bio-memoir chapter (Untold, in progress) to my critique group. One member after supplying feedback, suggestions, and edits, per our group’s process, said, “What’s a Cradle Roll?” Another said as she has before, “I’d like to hear stories about how you research.”

First, let me say that my writing has never been so derailed and distracted as when I researched Cradle Rolls.

Do you want to know who created cradle rolls, and when? No problem. Two sisters, both Sunday School teachers, in Elizabeth, New Jersey in 1877. What good is a Cradle Roll? Well, sometimes they’re used to establish births—which is exactly what I believe my father did in order to procure a passport for my mother.And…what about those Presbyterian scholars in New Zealand who write about cradle Rolls?

Wait a minute, nobody wants such far-away facts, but I’m going to tell you anyway. In 1907, one Kiwi Presbyterian noted that women in the Women’s Christian Temperance Union were involved in “some rather quaint activities,” i.e. Cradle Rolls, “a mystic but motherly-sounding venture.” The spokesman was certain that the purpose of Cradle Rolls was to get mothers to sign up their children and commit to bringing them up as abstainers.

I love that kind of incidental trivia. With my family history/memoir writing project, I’ve found myself with fistfuls of well-researched irrelevancies that struck my fancy and possibly noone else’s.  But you know what, I don’t think I can change. Heavy revision is required and/or finding places for extraneous material––like in this blog: a justification for serendipitous searching.

Let’s start with rabbit holes.  You know what a rabbit hole is: a cavity dug by a rabbit which she claims as her home. Today, the destination for human rabbits, thanks to the Internet, is not often home. Investigators hyperlink into distracting labyrinths from which escape is difficult, arriving at information often unconnected to original questions.

As Alice discovered when she tunneled into her fantasyland of anthropomorphic characters, rabbit holes are a metaphor for entering the unknown, for broaching something stranger than imagined. Lewis Carroll’s book was published in 1865, long before a subculture called hippies appropriated psychedelics to amp up their view of the world.

Sagacity, now there’s a word to embrace! Wouldn’t we all like to be known as discerning, intelligent, and having an aptitude for investigation?

Is my related pursuit in this paragraph intelligent, an apt investigation? Maybe. Anyway, it’s a rabbit hole that fascinates me: Walpole met Horace Mann just once, but he maintained epistolary contact with him for 45 years and penned more than 4000 letters to a variety of other correspondents. Called “perhaps the most assiduous letter writer in English,” his correspondence has been published in thirty-eight volumes and also exists in a difficult-to-navigate digital compilation at a Yale University Library: http://images.library.yale.edu/hwcorrespondence/)

I’ve also found justification in another word: obliquity. I take Merrill-Webster’s definition into account––“deviation from moral rectitude or sound thinking”––as well as the Oxford English Dictionary’s “Divergence from right conduct orthought”––but I prefer the interpretive application given by systems engineers:“Obliquity is a theory that proposes the best way to achieve a goal when you are working with a complex system is to take an indirect approach instead of adirect one.” (www.searchcrm.techtarget.com). The best way. Yes, I think it is.

I value cogent, relevant, well-constructed prose. My bio-memoir’s end goal is truth and understanding, big concepts that have guided the discovery of obscure information and the construction of chronology—i.e. my family history. I have a high tolerance for segues; in fact, I have a preference for them because they help me figure out the world that my ancestors lived in.

Also: way back when I said my writing about cradle Rolls had never been so derailed and distracted…not true. Derailment and distraction are the curses of the curious and undisciplined, fellow-traveling qualities in every manuscript I produce.

And one more rabbit hole: Wanna know more about those New Zealand scholars–– theologians, historians, clergy and students who meet four times a year and start their meetings with “drinks and nibbles.” They’re called Presbyterian Research (https://preshist.wordpress.com/nz-presbyterian-research-network-2/)–– a collaboration between Knox College and the Presbyterian Church of Aoftearoa (the Maori name for New Zealand). Or, check out their (non-scholarly) 2010 piece on and reproduction of Cradle Rolls on their website: https://preshist.wordpress.com/2010/08/20/the-cradle-roll-and-its-ephemera/

Rabbit holes can lead the researcher Down Under. I’m happy about that.