B is for Backwards

If you read my first blog, Appearance, did you notice that I did not complete the second half of Ozeki’s prompt: “Go take a ride on the bus or the subway. Study all the other passengers carefully. Notice that they have faces too.”

You won’t mind, will you, if I substitute a 35-hour train ride to the Association of Writers and Writers Programs (AWP) conference?

I’m riding backwards in a glass-domed car on Amtrak’s Coast Starlight train. For a mere $100, I am traveling 1377 miles from Seattle to Los Angeles. This is no bullet train, but speed is not a concern, as long as I get to LA by the opening of the conference. I like the relative leisure of looping through mountains and alongside the Pacific Ocean. I did not book a sleeper. The journey includes only one night, after all, and I’m spending most of my time in the dome car, a fine place for studying faces.

Part two of Ozeki’s prompt uses the word “study” instead of “stare.” The word “study” sidesteps possible rudeness. To fix a concentrated, eyes-wide-open gaze upon one’s own face is acceptable, though a person with a mirror aimed at her face in public is likely to generate a few stares. Study is the slightly gentler word to describe an academic pursuit, I tell myself.

Man One: Across the aisle, I see the profile of man. He has a prominent nose and  ruddy dark skin. A black-and-white sketch would require repeated sharpening of charcoal and pencil to reproduce  his asphalt black beard. He is frowning–his eyes shifty agates of black marble. His shoulders are hunched up in a khaki jacket. He is wearing pants with many pockets. He looks how I would expect a terrorist to look like. 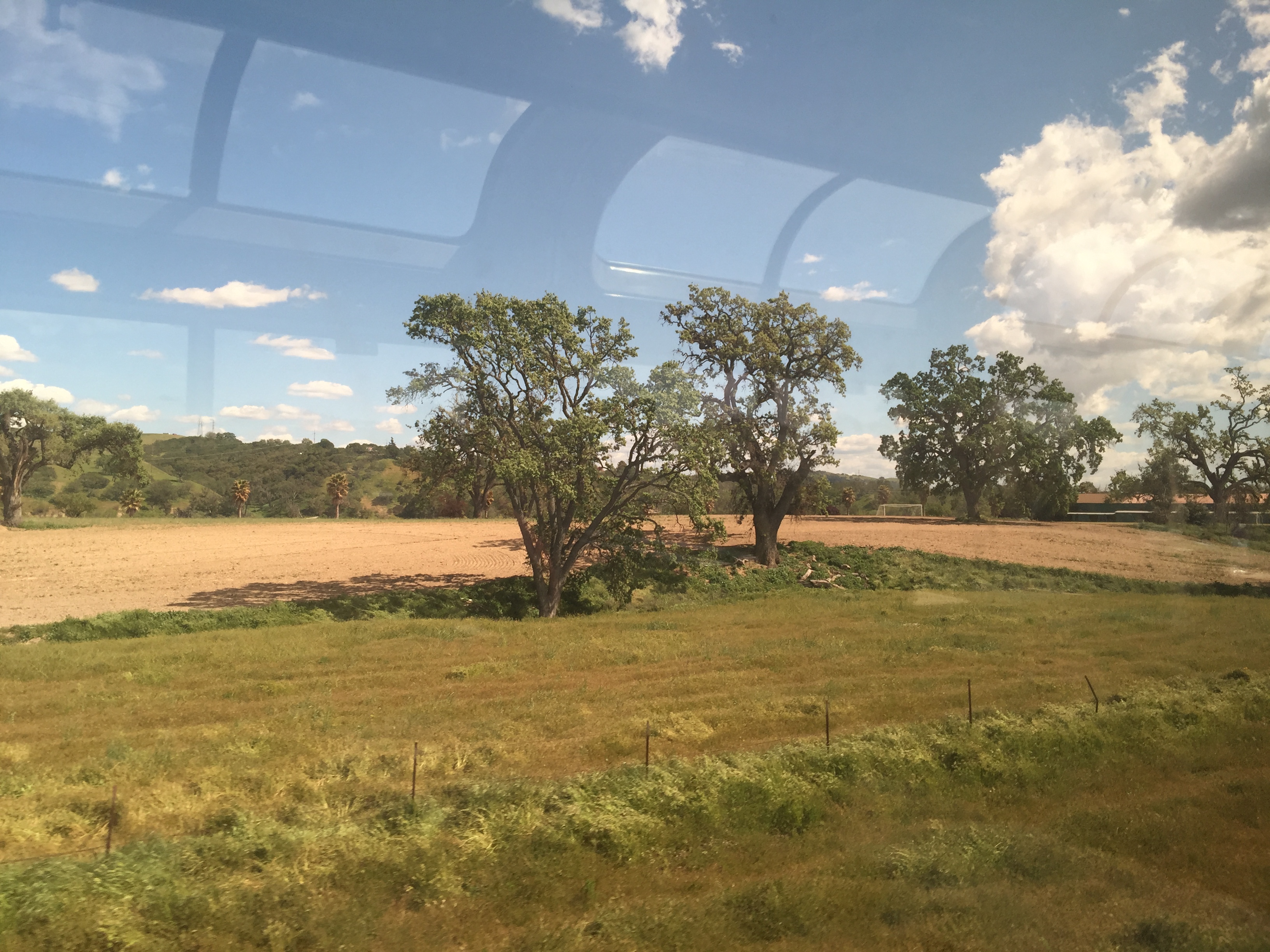 Man Two: As the train travels through furrowed fields outside Portland, I turn my attention to the round face of a round man with the baby face of a teenager. He has several chins, no neck, and globular cheeks that look like storage units for mashed potatoes. He is eating something healthy: a Granny Smith apple the same chartreuse as the billed Seahawks cap that bisects the circumference of his head. His hands hold a gaming control. He rarely looks up. His mouth is open, agape and expectant like an undernourished bird. He would not be nourished by this prose. I watch him for 30 minutes. He rarely looks up until he arises, looking toward the exit to the bathroom.

Man One smiles at him, one of those grins that is a handshake all its own. “Do you want me to watch your stuff?” he says?

I understand that I have profiled him. I’m ashamed of my sharp discriminatory, backward judgment.

Man Three: A slim, middle-aged fellow with small colorless eyes sits at a table four rows ahead. He wears a matching cap and a T-shirt, each with a graphic of a fishing vessel and the silkscreened words “F/V Alliance.” In the space of two hours, he purchases three beers for himself and one each for two younger, hard-looking women. I cannot hear most of their conversation but his flirty gestures are apparent. He leans forward, pats the shoulder of one, pinches the cheek of the other, laughs loudly. Finally, one woman gets up, says, “Nice talkin’ to you, we have to go now.” They leave.

Man Three stands up unsteadily, holding on to the back of his seat. He screws up his mouth, raises one eyebrow, emits a few unintelligible syllables, and talks at, but not into his phone. A fellow passenger, reading a Seattle Times, sits across the aisle. Man Three, placing his hand the back of  Fellow Passenger’s chair, leans  down and says “High five?” There has been no conversation between them. Fellow Passenger looks up, perplexed, returns the high five, confusion still upon his face. What else could he do?

Man Three moves along and hovers over two little Asian boys playing Legoes. He mutters, “Are you guys one of those Japanese geniuses?” he says.

Backward.Inebriated and backward and an example of Shakespeare’s observation that the “subtleties of character stare out like the bones of a starved beast.” Man Three is backward, inebriated 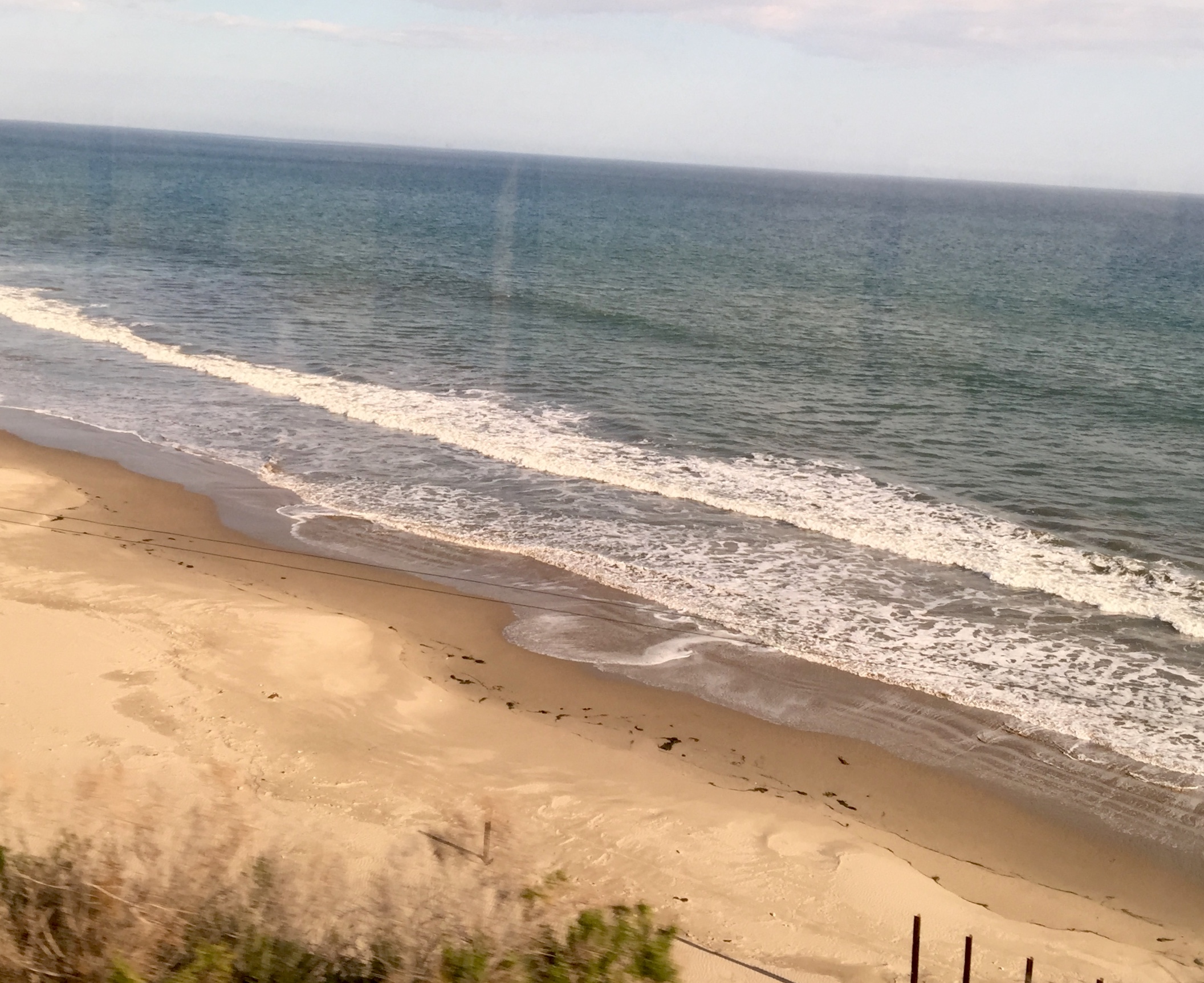 A new passenger sits down across from me, casts me a friendly nod. His eyes are green. His furry beard and pony tail, are both about six inches long. His hair is auburn, a shade that elegant women specify at fashionable salons. His legs are stretched out, his head is bowed over what looks like a scholarly book. When he leaves to buy food, I note the Library of Congress number and name on the spine: Peirce and the Threat of Nominalism by Paul Forster. I read enough on Amazon to learn that Peirce is the father of pragmatism. Sometimes a single fragment of knowledge is enough. I won’t buy the companion volume titled Pierce: A Guide for the Perplexed. When he returns, he asks, “What are you studying?” I am tempted to say “faces,” but he has pointed at the book in front of me: Zen and the Art of Writing by Ray Bradbury. “Creative Writing,” I reply, and he brightens. He is completing a master’s in philosophy and logic at Simon Fraser University, but he wants to get an MFA in Creative Writing next. We begin a long and satisfying conversation.

I have not concluded this experiment successfully. I have not confined my study to bone structure, shape, skin texture and hue, placement and color of mustaches, beards, eyebrows, the geometry and sizes of noses, foreheads, lips, chins, etc. I can’t help but think about and sometimes refer to the dimensions of the head, how the neck attaches, whether ears fan out or not. I can’t stop there. I have to consider what it is I and my Amtrak companions are doing: is our movement forward or backward as we travel on the railroad tracks of our lives?