Linda Q. Lambert is a retired community college library director, a 2015 graduate of the Stonecoast MFA 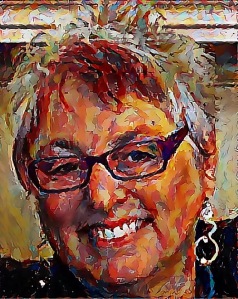 Creative Writing program at the University of Southern Maine, the mother of four sons and three daughters, and grandmother to thirteen.

She also holds a masters degree in Journalism from the University of Southern California and one in library science from Emporia State University.

She is an active member of Red Wheelbarrow Writers in Bellingham, Washington, an organization which provides monthly happy hours, participation in a collective NaNoWriMo novel, the chance to be a Writer in the Window at Village Books, and interaction with a diverse bunch of engaged writers. The groups’ publication, Memory Into Memoir (2016), includes Lambert’s essay “Her Name is Quintana Roo,” a story about meeting Joan Didion and her daughter in the sixties. She contributed the introduction to Red Wheelbarrow’s second anthology, So Much Depends Upon…, as well as a personal essay: Poetry: Accidental and Occasional.

She inserted the initial Q in her name to honor the Quinbys who adopted her and to eliminate the alliterative overkill of Linda Lee Lambert.